14 Amazing Emotional Support Dog Benefits – Some Will Surprise You!

Growing evidence supports the benefit of owning an emotional support dog (or other animal) to improve a person’s emotional and physical well-being.

I was reminded of this last weekend while attending a fundraiser for Retrieve a Golden of the Midwest. I was catching up with a dear friend, Jane Nygaard, the founder of the organization. She recently adopted a new golden retriever, having gone months without a dog after her previous golden passed away last fall.

Jane commented to me that since adopting her new dog Leo, her blood pressure had dropped noticeably. When I expressed interest, she pulled out her phone and showed me her blood pressure readings: the drop in pressure since she adopted a dog was impressive!

Our conversation reminded me just how powerful the emotional and physical benefits of owning and interacting with pets can be. Even if we don’t struggle with mental health issues, we all understand the happiness that a pet can bring. A simple mindful dog walk can change our mood for the better; their happiness, contentment, and living-in-the-moment attitude is contagious.

Emotional support animals provide companionship and emotional support that reduces or alleviates a person’s stress in a variety of situations. They do not require specialized training and are allowed by law on planes and in no-pet housing situations, but aren’t allowed in all places where service dogs are allowed. (more details later in this article)

The more I read, the more emotional support dog benefits I learn about. What’s really fascinating is that the benefits go beyond emotional – there are documented physical/medical benefits as well.

In addition to the numerous mental health benefits of owning an emotional support dog, these dogs can provide an amazing array of physical health benefits as well. Stories abound of people who are able reduce or discontinue medication for certain issues after getting a dog.

Owning a pet can lower anxiety both directly and indirectly. Research on the pet-anxiety connection has documented that interaction with dogs increases levels of serotonin, dopamine, and oxytocin, the “happy hormones” which produce feelings of relaxation, calm, and positive emotion. The same studies have noted decreased levels of cortisol, a hormone produced in stressful situations.

In addition to spurring chemical changes in the body, having a pet can reduce anxiety and depression indirectly through:

Each of these can boost a person’s mood and ease depression or anxiety.

Another study noted decreased suicidal impulses and medication use.

The companionship of a dog can not only reduce anxiety, but reduce the feeling of alienation some people feel in social situations. Dogs encourage people to get out of the house, and attract positive interactions with others once the dog and its owner are outside. Studies have shown that strangers offer more smiles and friendly glances to people with dogs, and are more likely to approach them and have a conversation with them.

This study about service dog benefits found that disabled people accompanied by a dog reaped much more than the service benefits. Strangers were less likely to deliberately avert their gaze or walk out of their way to avoid the disabled person when they had a dog, and the disabled person received more smiles and found more people engaged in conversations with them.

Pets not only decrease loneliness by the companionship and love they provide, but they increase the likelihood of people getting out of their house and being a part of social interactions.

In nursing homes where companion animals are present, having an animal involved in the residents’ daily routines leads to a decrease in their medications. Animals encourage laughter, exercise, and happiness, which can boost your immune system and increase energy.

In addition, these emotional support animals help to ease the stress of caregivers as well.

8. Children With Learning and Behavioral Disorders

Interacting with an emotional support animal can help a child with a learning disorder remain attentive and alert, and provide comfort and support that eases the frustration and stress caused by the learning disability.

Dog ownership is thought to lower blood pressure in two ways: 1) increased activity/exercise involved in walking the dog, and 2) the calming effect of petting a dog.

A study of body response to petting a dog by A. Beck & A. Katcher noted that when petting a familiar dog, a person’s blood pressure lowered and their heart rate slowed. In another study looking at heart rates and dog interaction (J. Vormbrock and J. Grossberg), subjects experienced lower heart rates when touching or talking to dogs. This kind of effect is exactly what my friend Jane has experienced now that she has a dog again – her blood pressure has been consistently lower, and I would bet the accompanying measures mentioned above changed as well.

I also read about a randomized trial presented by K. Allen at the 22nd Annual Scientific Sessions of the Society of Behavioral Medicine (March 24, 2001; Seattle, WA). In this trial, 30 participants with borderline hypertension were randomly split into 2 groups. Members of one group were all allowed to adopt dogs, and all experienced a statistically significant drop in systolic blood pressure 5 months after adopting a dog. The “no-dog” group did not experience any drop in blood pressure during this same 5 month period. Later, when the “no-dog” group had finished the study and were all allowed to adopt a dog, their blood pressure dropped as well.

In this cholesterol study of 5,741 men and women in Australia, dog owners had lower triglyceride and cholesterol levels than non-dog owners that could not be explained by diet, smoking, or BMI.

When we take our dogs out for a walk, hike, or run, it’s FUN! Dogs are overflowing with happiness, which makes the owners happy, and deepens the dog-owner connection.

13. Lower Risk of Allergies and Asthma for Children

It’s true! Children raised in homes with pets have a lower risk of developing pet allergies. A study of allergy rates in children published in the Journal of Allergy and Clinical Immunology showed that exposure to dogs and cats actually lowers a child’s chance of becoming allergic to pets by up to 33%! Findings suggest pet exposure may also help kids develop stronger immune systems.

As people get older, many experience more frequent health issues. Owning a dog can help!

Health care research of pet owners over age 65 showed that they have 30 percent fewer visits to their doctors than those without pets, while another study showed that dog and cat owners have fewer doctor visits and are less likely to be on medication for heart problems or sleeping difficulties.

Yet another research finding stated that elderly owners of dogs in particular were buffered from the impact of stressful life events, causing a reduced utilization of physician services.

How do I get Emotional Support Dog Certification?

Emotional support animals do not have the same access rights as service animals and are not covered by the American Disabilities Act (ADA). They are currently covered by the Fair Housing Amendment Act (FHAA) and the Air Carrier Access Act (ACAA).

The FHAA requires that a housing provider allow an emotional support animal to live on the premises (as long as certain certification conditions are met).

In Dec. 2020 the U.S. Department of Transportation announced that emotional support animals will no longer be treated like service animals and will not be allowed on airplanes.

If your doctor is not aware of the benefits of an emotional service animal, and you do not have access to a therapist there are online options, but beware! There are a lot of scammers online; I would highly recommend finding a local therapist or doctor to work with instead.

The benefits of owning an emotional support dog are truly amazing.

Each person is different, but the potential benefits of owning an emotional support dog are far-reaching:

Dogs can tune into our moods, our physical struggles, and our emotional needs. In more and more cases, emotional support animals are providing relief, progress, hope, and independence for people in ways that modern medicine can’t.

Has an emotional support dog affected your life, or the life of someone you know? Share your inspirational stories below and spread the word of the amazing power of a dog’s love.

Check Out These Additional Posts!

Karen is an independent copywriter who loves dogs and everything about them. She is married to Scott, has 4 kids, and likes to take a natural and holistic approach to living and pet ownership. 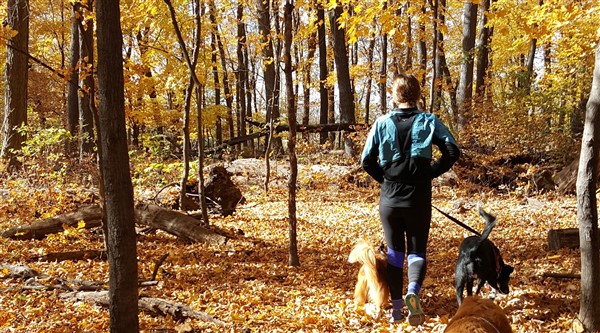 Happy Natural Dog: How to raise a dog naturally in all aspects of life
0 shares